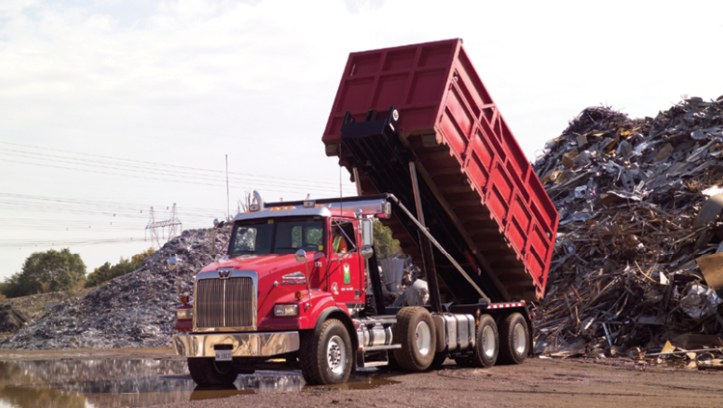 Brampton, Ontario-based Triple M Metal LP is an impressive company within its own right. The firm garnered more than $1 billion in revenue in 2017, buying, processing and selling scrap metal from 26 locations in Canada, the United States and Mexico.

At the same time Triple M founder Mike Giampaolo and his brother Antonio (Tito) have been leading that company through four decades of growth and forward momentum, they also have helped to assemble the Giampaolo Group of Cos. That portfolio of firms includes Triple M; secondary aluminum producer Matalco Inc.; electronics recycler GEEP (Global Electric Electronic Processing); steel distribution center operator Venture Steel; and Giampaolo Investments Ltd., which engages in financing, asset management and property management aspects that affect the Giampaolo Group as a whole.

Giampaolo Group CEO Joe Caruso says a culture of business planning based on the “years of combined knowledge and experience” found in the company’s leadership team has helped put Triple M and the Giampaolo Group atop Ontario’s recycling sector and to create a continentwide footprint.

Pumping up the volume

He continues, “We have grown both organically—through investment in new yards, equipment and technology—and through strategic acquisitions.”

Giampaolo and the company’s other managers have “achieved such impressive growth over the years through a dedication to first-class service, long-term strategic planning, competitive pricing and a commitment to creating value-added partnerships with our customers,” Moniz says.

Triple M, Caruso says, “was founded on an ‘earnings culture’ based on continuous improvement, eliminating waste, extracting value and realizing efficiencies for our customers wherever possible.”

The result has been a North American network of 26 locations and annual revenue that topped $1 billion in 2017.

“We also process over 35 million pounds (17,500 tons) of insulated wire per year at our chopping line,” he says of a Triple M operation also in Brampton.

The company seeks scrap from every level of the collection chain. “We source scrap from every segment of the market, from local peddlers to multinational industrial generators,” Moniz says.

The grades the company produces often stay within North America, but, Moniz says, “Triple M also sells on a global scale, selling to Europe, Asia and Turkey.” In all buying markets, he says, “Consumers value Triple M’s significant footprint and the amount of volume we are able to offer.”

Giampaolo Group of Cos. at a glance

Triple M operates four metals shredding plants in Canada and an extensive downstream system in Hamilton, Ontario; a wire chopping line in Brampton; several stationary and mobile balers and shears; a fleet of hydraulic scrap handlers and wheel loaders; crane- and loader-mounted attachments; a truck fleet; a container fleet; and a fleet of 150 rail cars.

Even with the effort and energy it has taken for Triple M to attain its global status, Giampaolo and his management team also have assembled a portfolio of sister companies with either a recycling or metals industry tie-in.

Among the fastest growing of those companies this decade has been Matalco, a secondary aluminum producer with a direct connection to some of the aluminum scrap Triple M processes. Matalco produces what Caruso calls 6000 series, extrusion-grade aluminum billet “manufactured primarily from recycled aluminum.”

Matalco’s headquarters and a billet production facility are in Brampton. It selected Ohio as its initial base of operations in the U.S. Metalco operates two secondary aluminum billet facilities in the state, one in Canton and the other in Lordstown (near Youngstown). In January 2018, it purchased the former Alexin secondary production facility in Indiana.

“Matalco allows Triple M to view aluminum scrap material through the eyes of a consumer rather than just a metals recycler,” Caruso says. “The two companies provide a vertically integrated, closed-loop approach to aluminum scrap procurement and billet production that ensures Triple M can offer our customers the best price for their aluminum commodities.”

Giampaolo Group also has vertically integrated on the ferrous side, moving into the steel service center sector with the creation of Etobicoke, Ontario-based Venture Steel in 1997. “Venture is a processor and distributor of flat-rolled steel products with four processing facilities in Canada and Mexico,” Caruso says.

Together, Triple M and Venture can provide manufacturers with what Caruso calls “a full line of flat-rolled steel products in conjunction with scrap metal services. The two companies share the same customer bases and provide one another opportunities for synergy and growth.”

In 2011, the Giampaolo Group entered the electronics arena, purchasing a majority stake in Barrie, Ontario-based GEEP. That firm collects, refurbishes, disassembles or shreds obsolete electronics. It has nine locations: six in Canada, two in the U.S. and one in Costa Rica.

2017 may be remembered by recyclers around the world as the year China’s government made a sudden decision the nation would be better off without imported scrap materials. For Canadian recyclers, 2018 may stand out as one when a United States president suddenly decided Canada was a suspect ally and trading partner.

The management team of Brampton, Ontario-based Triple M Metal LP has had to weather both diplomatic storms. Triple M has operations that span all three North American Free Trade Agreement (NAFTA) nations, and, like recycling firms everywhere, it has shipped scrap to China in considerable amounts since the 1990s.

Although the Chinese government has stated it intends to curtail its reliance on imported scrap and has banned some scrap grades altogether, it continues to accept other grades provided they meet new, stringent purity levels. Triple M President Oscar Moniz says the effects have been numerous.

“Zorba import demand in China has been drastically reduced because of these new regulations, and domestic secondary aluminum prices have begun to erode as a result,” Moniz says. “The industry will have to look for new homes for material both domestically and abroad as well as invest in processes that can recover 99 percent metallics to meet China’s new stringent standards.”

For Triple M, Moniz says, this means it “will continue to invest in equipment (chopping line and nonferrous downstream separation) that can reduce our export requirements and create the cleanest high-grade end products possible.”

In the U.S., President Donald Trump campaigned against aspects of NAFTA, with most of his initial criticisms aimed at Mexico. He also routinely points to China as a trading partner taking advantage of the U.S. However, his Section 232 (national security-related) tariffs on steel and aluminum also have included Canada—a nation that has shared the world’s largest undefended border with the U.S. for more than a century.

Moniz says the U.S. tariffs of 25 percent on steel imports and 10 percent on aluminum imports from Canada and other nations resulted in the Canadian government responding with a list of goods supplied by the U.S. to be targeted in retaliatory tariffs that took effect at the beginning of July.

“These tariffs, in combination with stalled NAFTA negotiations, have created a high level of uncertainty and unpredictability about the future of Canadian-U.S. trade and the steel, automobile [and] manufacturing industries as a whole,” Moniz says.

An extended trade dispute is likely to lead to disruption, he says. “Should these tariffs continue long term, the scrap industry will be affected by possible swings in the price of finished steel and aluminum as well as the potential relocation of some Canadian and U.S. manufacturing operations.”

Tools of the trade

Throughout its history, Triple M and the Giampaolo Group have adhered to a range of operational techniques and management philosophies that the group’s managers say are crucial to profitability.

In a decade when freight costs and service have become an industrywide woe, Triple M Vice President of Ferrous Trading Michael Hlacar says the firm has long paid close attention to this aspect of the business. “Freight is often the largest expense (as a percent of product value) in the scrap metals industry,” he says. “As a result, we employ a wheel-and-spoke model at all of our locations, setting up shop strategically close to our consumers and suppliers in order to use transportation resources as efficiently as possible.”

The company also does its best to control the freight service realm. “Triple M Metal’s private truck and container fleet is one of the largest in North America,” says Steve Leddy, the company’s mill service vice president. “All of our trucks are equipped with GPS tracking, enabling our dispatch to monitor our fleet in real time. The system alerts us in the event of idling or poor route efficiency, in line with our core values of reducing waste and ensuring our supply base receives first class service.”

On the rail side, Leddy says, “Triple M is home to a private fleet of 150 high-capacity rail cars that help to reduce outbound freight costs for our customers.”

Whether employees and managers are dealing with processing, trading or freight issues, Moniz says good hiring and training methods are crucial. “Triple M Metal believes strongly in leadership building, cultural fit and performance-based compensation for all of our 1,000-plus employees.”

He continues, “All new hires attend ‘TMM University,’ an extensive program that spans all aspects of the business. This training gives new employees a strong foundation for their future careers within the company and affords management the opportunity to recognize leadership potential and assess where a new hire’s talents are best suited.”

A good culture yields a tenured workforce, Moniz says, but that does not mean the firm falls into habits and routines. “Our company utilizes a collaborative culture that combines all of our individual expertise in order to create a customized approach to scrap management for our clients.”

Triple M’s operations revolve around what Caruso calls “a data-driven approach to scrap marketing: We believe that if you can’t quantify something, you can’t improve it. As a company we are constantly evaluating processes and procedures to ensure maximum returns are being generated for our scrap portfolio.”

Attention to profitability and customer service are critical in all market conditions, Moniz says. “We avoid the commoditization trap for our products and services by having the customer’s needs at the core of our strategy.”

Regarding the future, Caruso says, “Triple M will continue to invest in new technologies and opportunities that make us unique and add value to our supply and customer base.”